Have you ever wondered what the finest and most expensive houses could look like? Then here, with combined information from Forbes, we bring you images of the world’s most expensive homes, designed by professional and talented  architects and groomed with the finest luxury you can ever imagine. And NO! they don’t belong to your favorite movie stars and musicians. Apparently there are people who make more money, we talking top business magnates, and mega investors, you know, the COO’s and the CEO’s. Though some of these mansions have been in existence for years, continuous revolutionizing by the billionaire owners transform them to what you would call the modern day castle. The Mexican business magnate purchased the mansion for $44 million in 2010 but the rather frugal business magnate prefers to live in his modest house in Mexico. He recently put the house up for sale with a $88 million price tag on it, if that goes through, it will make it the most expensive townhouse ever sold in NYC. According to the listing, the house is a 8-story building with French Renaissance interior. It features high ceilings, gold-leaf trimmed fixtures, and a sweeping staircase. When your dad is a billionaire and you are the heiress to his fortune, you can pretty much afford anything, including a home on the exclusive billionaire row street, where Dukes, Duchess and ambassadors are your neighbors. Tamara’s 57-room house contains, a beauty saloon, bowling alley, pool, car lift, dog spa, and a basement cinema. Alias the Spelling manor, it was originally listed in the market for $150,000 but Petra bought it for $85 million after it failed to find a buyer for two years. The 56,000 sq ft mansion has 123 rooms making it one of the largest homes in LA county. Its features includes a bowling alley, gym, tennis court, gift-wrapping room, screening room, pool, and a car garage that can take 100 vehicles. 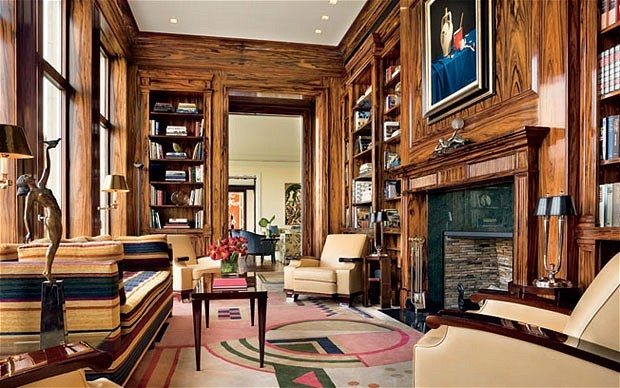 Ekaterina Rybolovleva (22) is a rich kid, daughter to the Russian fertilizer tycoon Dmitriy Rybolovleva. She is currently a student at a university in New York and attends school from the million dollar apartment she bought with her fathers money. The house consists 10 rooms, a wrap around terrace, 7 walk-in closets and a library. Education couldn’t be more comfortable.

The hedge fund firm billionaire, CEO of Pershing Square Capital Management purchased a duplex penthouse in the One57 sky scraper for over $90 million. The apartment which spans across the 75th and 76th floors of the 90-story building boasts 6 bedrooms, 6 bathrooms, a winter garden enclosed in a 51-foot wide glass. The billionaire however, doesn’t reside in the condo, according to therealdeal.com, the billionaire said he purchased the condo for ‘fun’. The oligarch must have made the purchase as a strategy for business investment. The CEO of the Oprah Winfrey Network aka the Queen of Media, has houses scattered all around America – Hawaii, Chicago, Colorado, New Jersey…but the 23,000-square-foot Georgian-style estate seems to be the most outstanding. The building which sits on a 40-acre land space encompasses 6 bedrooms, 14 bathrooms, 10 fireplaces, over 600 rose bushes, tennis court, tea house, theatre, artificial pond and everything else befitting for a mansion. The Broken O ranch serves an all-round agricultural purpose.The 124,000 acre ranch inhabits a 10-square foot main house, indoor pool, horse stables, 3,500 cows, 800 heifers, 175 range bulls. The ranch has 13,000 of its acre well irrigated and produces tons of alfalfa hay, 700,000 bushels of small-grain crops per year. Stanley Kroenke, who is an ardent real estate collector is apparently also a lover of agriculture, having three other ranches to his name. The Russian Billionaire in 2008 purchased the beach house from American property mogul, Donald Trump for $95 million. The extensive mansion includes 18 bedrooms, gold and diamond accessories, 475-foot-long beach, and a parking space capacity of 50-cars. According to Gossip extra, in 2013, the Russian mogul planned to demolish the building because of mold problems. The Fleur de Lys estate, was constructed from the architectural design of Richard Robertson to original owners David and Suzanne Saperstine between 1996 and 2000. After the couple separated and wife gained ownership of the mansion, it was sold in a concealed deal to anonymous French billionaire at a whooping amount of $102 million. That sale made history as it became the only property to ever been sold at that price in LA. The private abode consists of 15 bathrooms, 12 bedrooms, 2 kitchens, a massive movie theater, a ball room, a tennis court, a gym, a pool, and a nine vehicle garage. The property sits on a 4.6 acre plot. The Hampton’s beach side landed property was acquired by mega investor at $103 million in 2007. The billionaire plans to raise his mansion on the 50-acre space. The Japanese Softbank billionaire’s 900,000 square-foot  manor is simply a masterpiece. The building features with a pool with a 1170 square-foot portico,  a tennis court, an isolated library, a separate leisure building, and well-groomed ceremonial gardens. Previously the property of timber magnate, John Rudey, the waterfront mansion which has been in existence since the 1890’s was sold in April, 2014 at $120 million to an anonymous buyer. The 13,517 square foot mansion with two islands consists 12 bedrooms, 8 bathrooms, grass tennis court, 75-foot pool, and a wood-paneled library. Perhaps the most fascinating feature of the Microsoft owners’ high-tech customized abode is the underwater sound system in its pool. The lake Washington estate also features a 2300-square-foot reception hall, 2500-square-foot gym, a 2100-square-foot dome-shaped library, a 6,300-square-foot underground garage and many other classic facilities. The Victorian villa, once the most expensive house in the world is now a property of business magnate, philanthropist Victor Pinchuk who is married to the former Ukrainian presidents daughter, Olena Pinchuk, ownership valid from 2008. It is revealed the new owners spent about $15 million modifying their villa to their taste. Though the exteriors look quite regular, the interior of the 5-story building is the exact opposite, having the most sophisticated luxuries including an underground pool, hi-tech panic room, a spa, a gym, and a cinema.The villa has ten bedrooms. This is actually a four-in-one property, the 8 acre oceanfront estate is made up of four buildings, situated abreast each other. Owner, Ken Griffin founder of Citadel demolished the fourth building. It is reported that all four buildings were once used as a single estate. Russian billionaire and owner of English football club also owns a number of mansions in London. The famous Billionaires’ Row Street mansion seems to be the most outstanding. The autocrat’s refurbish plan for his abode include an underground tennis court, a museum, and a health centre. The ski lovers will absolutely get dreamy about this one, as this building has a skiing ground for its immediate surroundings. The ski-property is situated within the billionaire Yellowstone club resort and belong to billionaire couple Time & Edra Blixseth. Despite the snow, the building feels as warm as you would like as every nook and cranny is fitted with heating systems. Making up the house are ten bedrooms and bathrooms each with a fire-place, an outdoor and indoor pool, a wine cellar and a gym. The One Hyde park is considered to be the world’s most expensive apartment building, since its debut in 2011, the 86 residence capacity has sold up to $3.37 billion. Little wonder why its unfinished penthouse without interior wall, bathrooms or flooring costs a total of $221 million. The penthouse sizes up to 16,000 square foot. It has been speculated that bringing the penthouse to a desired finish will cost nothing less than  $266 million. Exciting amenities in One Hyde park includes, top security facilities like bulletproof glass doors and windows, standby, armed and professionally trained security guards,  basement car park, exquisite spa, golf course, car cleaning services, pool, to mention but a few. The Indian billionaire owns not one but three houses on the highly secured billionaires row street This one sold by hedge fund billionaire Noam Gottesman was purchased for his son Aditya Mittal. The Hampton residence of billionaire Industrial investor, Ira Rennert, was completed within the space of 5 years, from 1998-2003. According to thepinnaclelist.com ,the home is said to be the largest and most expensive home in America. The home constitutes 29 bedrooms, 39 bathrooms, 3 swimming pools, 164-seat screening theatre, 2 tennis and squash courts, and its very own remarkable on-site power plant. 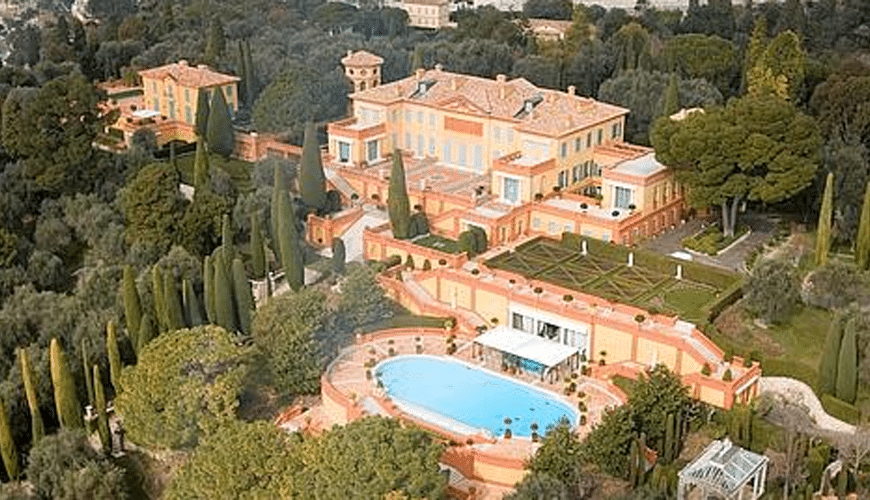 The amazing structure derives its name from original owner, Late King Leopold II of Belgium. The Architectural credit of this masterpiece goes to the American, Ogden Codman, Jr. The design and building process was concluded within the space of two years from 1929 to 1931. The king gave the estate to his mistress Miss Blanche Zélia Joséphine Delacroix, which was later inherited by the King’s nephew King Albert I after his death and the eventual eviction of his mistress. Ownership of the great building has evolved over the years. As of 2008, the property was purchased by Lily Safra at a price of $736 million. Siting on 50 acres of land, it features 11 bedrooms, an outdoor kitchen, a pool, and everything else. This 27-story, 56,000 ft sky scraper is actually a residential building, belonging  to the 5th richest man in the world, and richest man in India, Mukesh Ambani. This extraordinary structure was designed by Americans Lawrence Perkins and Phillip Will and constructed by Leighton holdings. There’s a lot to be said about this building but to satisfy curiosity I’ll just go straight to its incredible features; 9 elevators to move you through its floors, 3 helipads, 6 parking lots, with a total of 168 car capacity, pools, a well cultivated balcony garden with its plants serving as energy-savers occupying 3 floors, a temple for family prayers, a health spa, snow room, ice cream room, a saloon, a 50-seater cinema, a ballroom, a gym, indoor and outdoor bar. The building is tended to by 600 staff with their own relaxation room. It is constructed to withstand 8 Richter scale earthquake. This you would agree with me is a 21st century wonder. Yes! It is indeed a palace, official home to the one and only Queen of England, and other British sovereigns. Located it Westminster, London, It was built in 1703 to the Duke of Buckingham and stands on about 40 acres of land.

Since its existence, the palace has undergone several modifications and additions to make it a befitting abode for the royals. You shouldn’t expect anything less from this palace, from the magnificent and stunning artworks, to  gorgeous heavenly chandeliers, to gold-plated wares and furniture, the Buckingham palace is absolutely glorious almost indescribable.

The palace encompasses  775 rooms including  188 staff bedrooms 52 Royal and guest bedrooms 92 offices 78 bathrooms and 19 State rooms. Other facilities include; a pool, lake, tennis court, cinema, staff eatery, chapel, hospital and many more, and of course you know royalties go nowhere without their security and servants, they really do enjoy having everything at their beck and call.