Let’s flash to Erbil (pronounced Air-beel. Also spelled Arbil or Irbil, or, in Kurdish, Hawler or Hewler and pronounced How-LAIR), the bustling capital of the Kurdish Autonomous Region in northern Iraq (also known as Iraqi Kurdistan). The massive Erbil Citadel dominates the skyline, with every street in the city radiating from its center. The citadel sits atop atell, or a mound comprised of layers of many generations of human settlement. We’re talking so many generations here that the citadel is said to be the oldest continually inhabited place in the world, a fact that UNESCO backs! 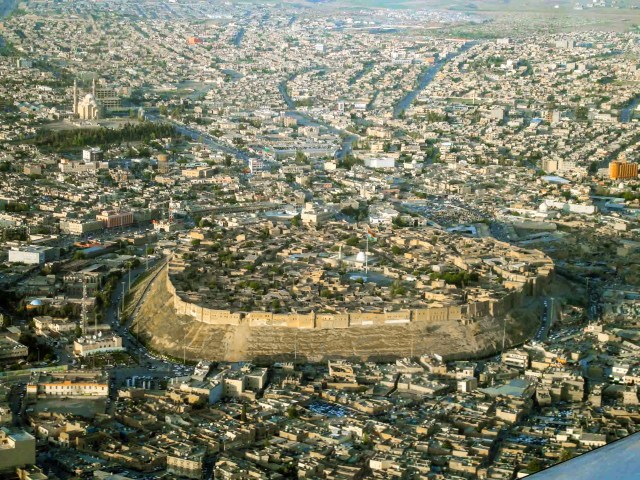 The sediments in this mound are thought to date way back to the 5thMillennium BCE. That’s 7,000 years yo! And on top? The center of historic Erbil. A mini city unto itself, though the streets along the crumbling mud-brick houses are quiet these days. The citadel is now a ghost town. Closed for renovations in 2007, all but one family were evicted as to maintain its record for being continuously inhabited. 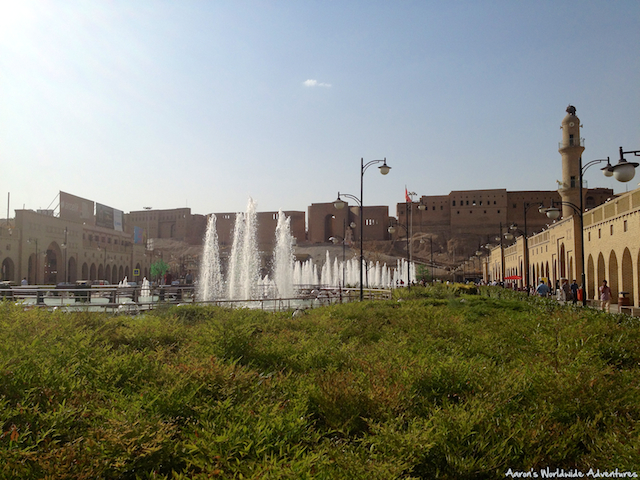 A visit to Erbil Citadel starts at the large bazaar at its base. An elaborate fountain leads the way to the entrance, as modern-looking structures form a wall around the citadel’s perimeter (my friend told me that these structures were built by Saddam Hussein’s administration). 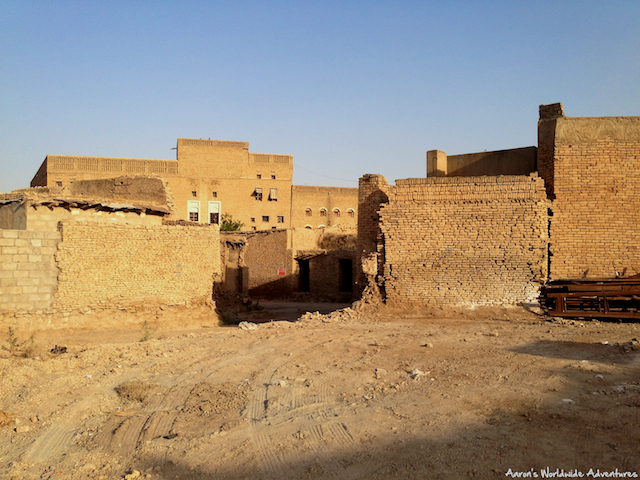 Many of the side streets are currently roped off, their structures being gussied up in hopes of one day becoming a World Heritage Site. In the meantime, visitors can currently traverse the main street leading to the historic Mula Afandi Mosque, where the friendly Imam showed my friend and I around, even taking us up on the roof for some panoramic views of the closed-off streets. 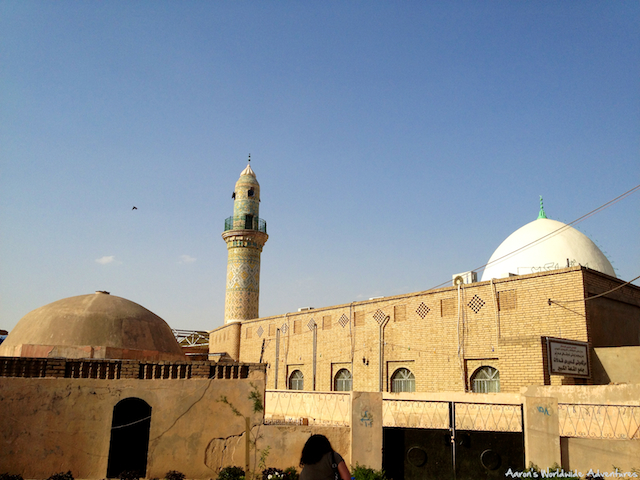 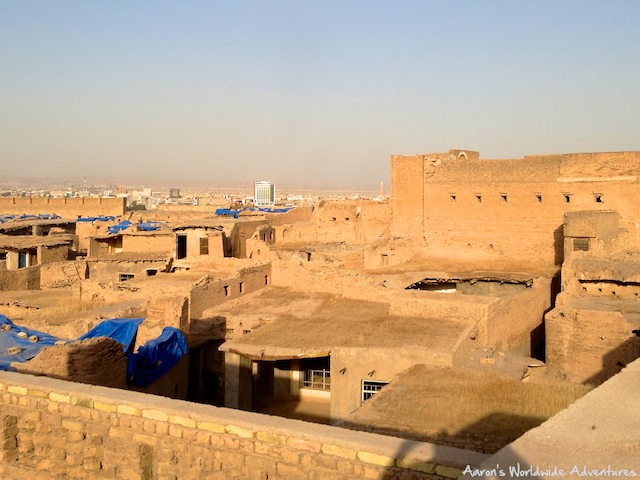 As we got to talking to the Imam, he told us he was a Sufi, a mystical branch of Islam, and that his family had resided in the citadel for many generations, pointing out the house his father had once lived in. In exchanging names, he, like many people in the Middle East, had trouble pronouncing my name (Aaron, pronounced Air-en). I mentioned that it was the name of the brother of Moses and, excitedly, he said, “Ooooh, you mean Harun (Ha-roon)!” Sure, Harun! 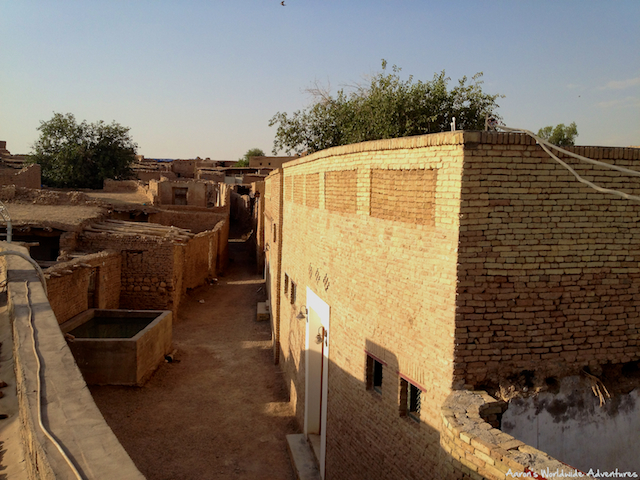 As we said goodbye to the friendly Imam, we decided to take a peek at those now-abandoned houses. And sure, we found some squatters in ruin… 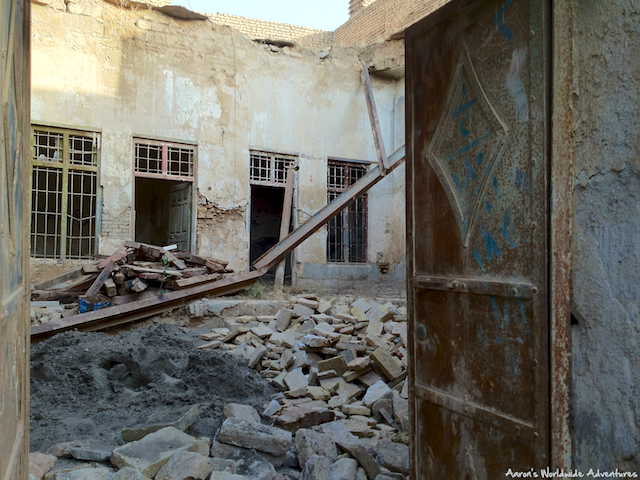 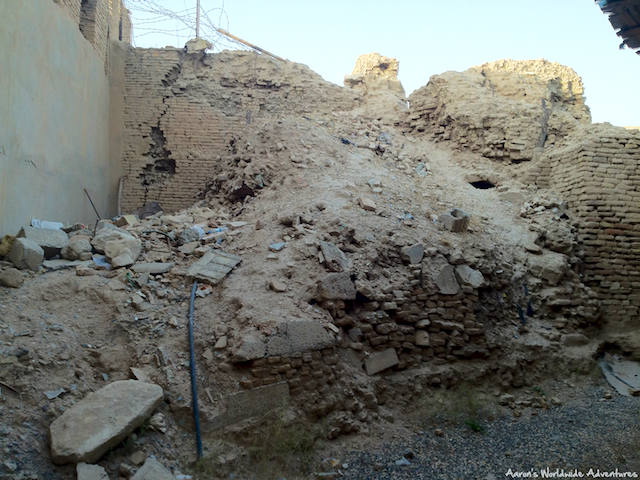 But we also found that many of the families that had once lived in the citadel were actually fairly well off. For many of the houses featured impressive courtyards! 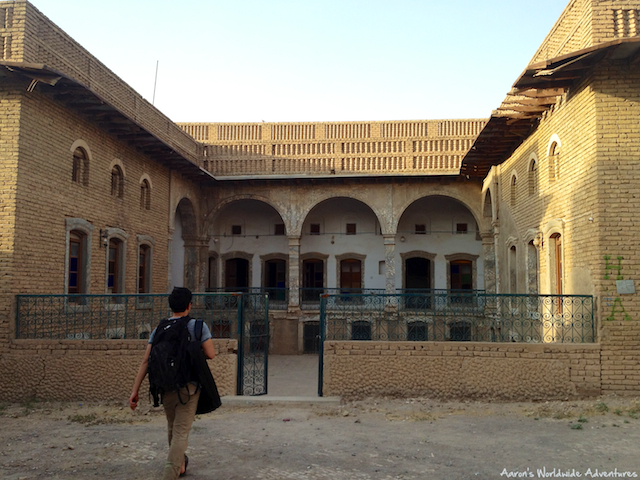 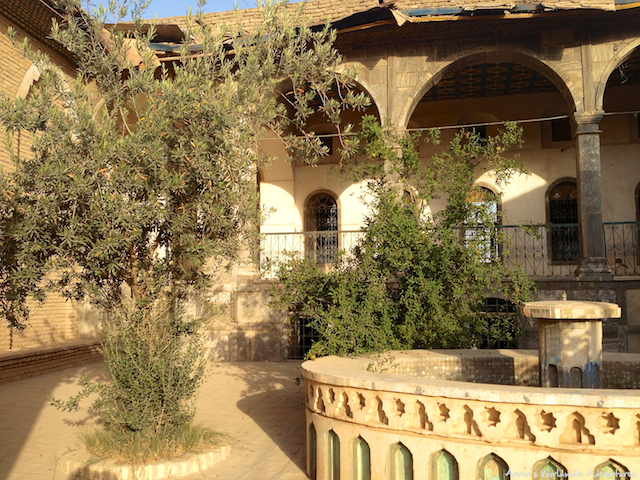 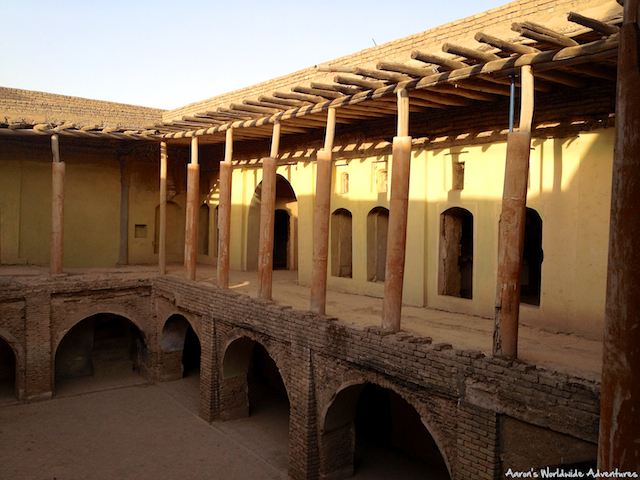 And beyond those impressive courtyards lay some grand-looking buildings. 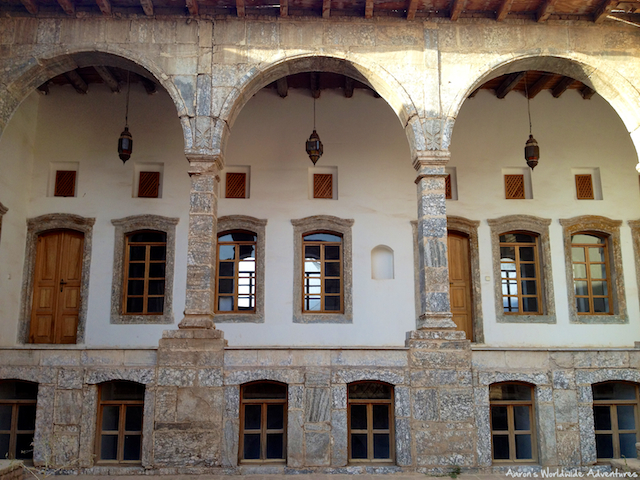 Some without four walls… 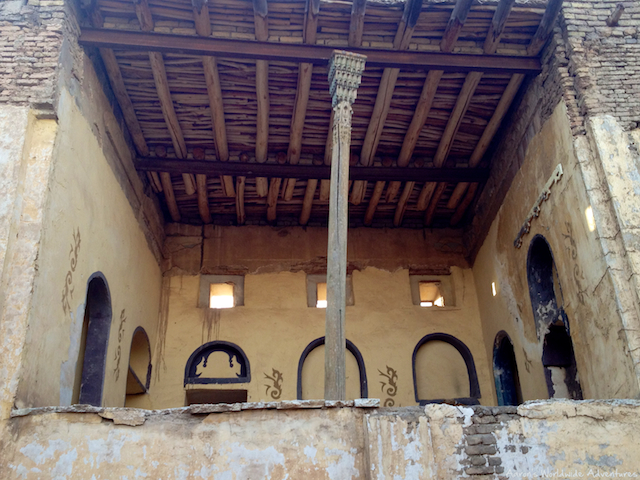 And many with impressive detail work, including built-in alcoves and nice tile and brickwork… 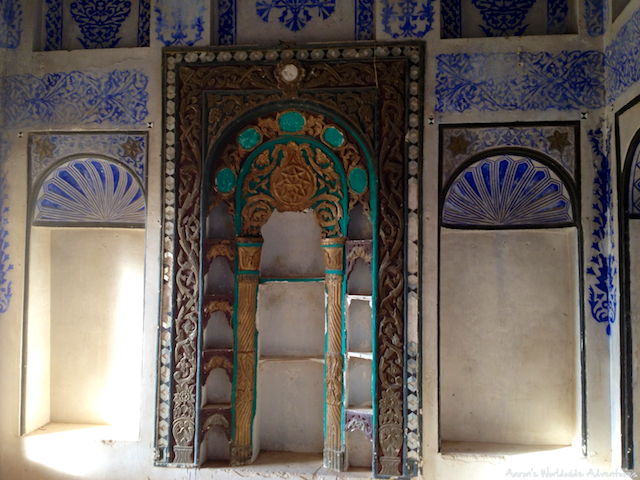 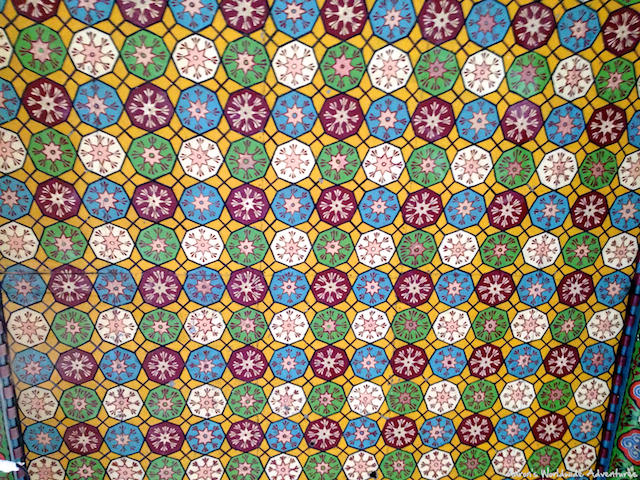 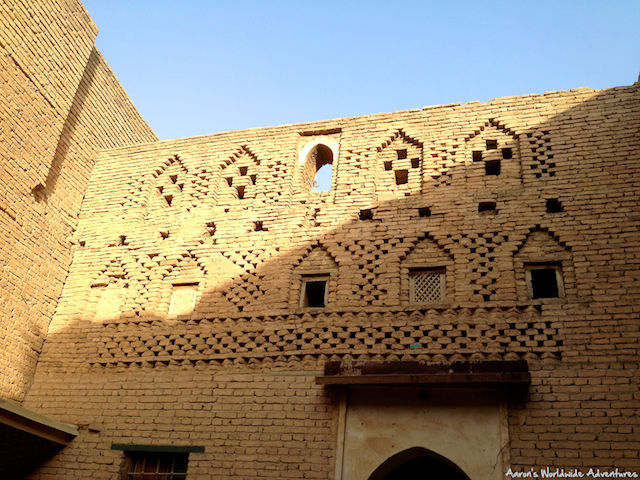 As we left, I couldn’t help but notice the houses that were on a level above the street. You could actually see the layers of sediments upon which they were built. 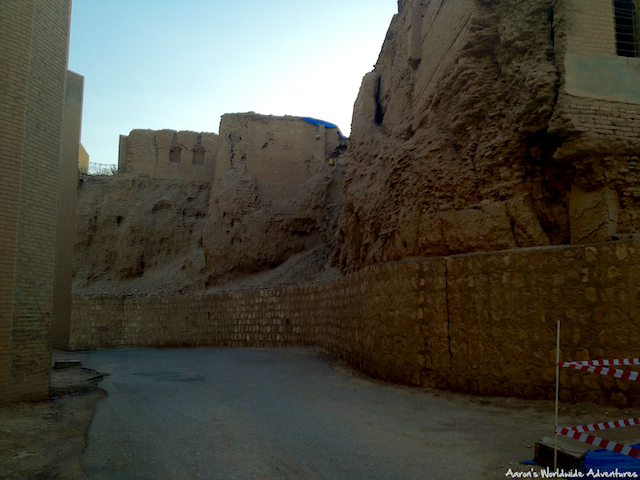 Stepping out of 7,000+ years of human history and back into the bustling market was, at this point, something fairly routine to me. After a month in the Middle East, the juxtaposition between old and new was nothing special. Though, in retrospect, the fact that you can step back thousands of years in just a few footsteps is pretty damn cool! 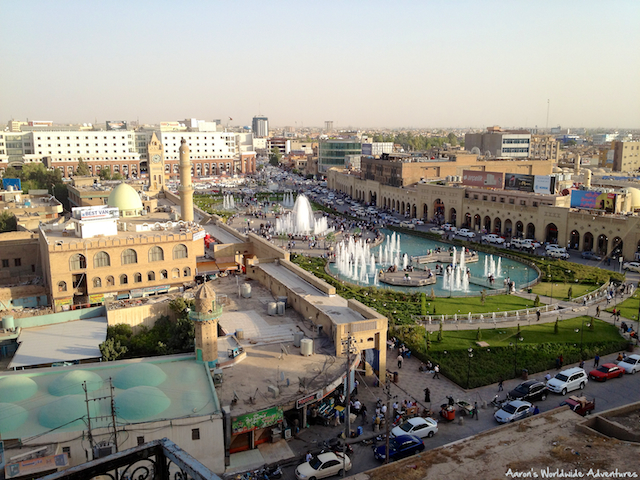 From there, it was off to watch the sunset over another nearby Erbil landmark…Minaret Park, featuring the broken 36-meter (118 foot) highMudhafaria Minaret, which dates back to the 12th Century CE. It made for the perfect evening to a historic Erbil afternoon! 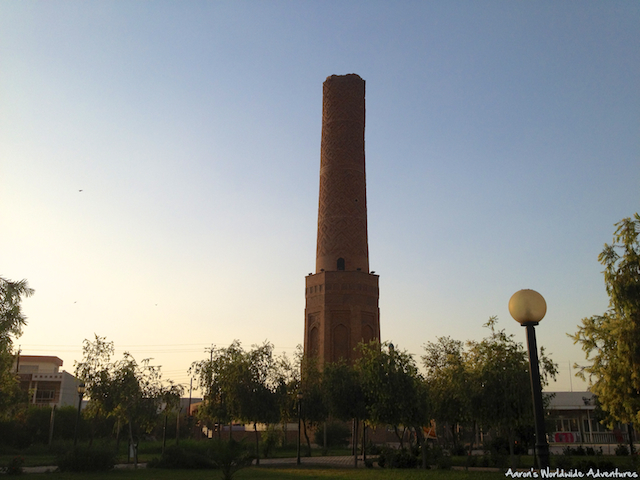